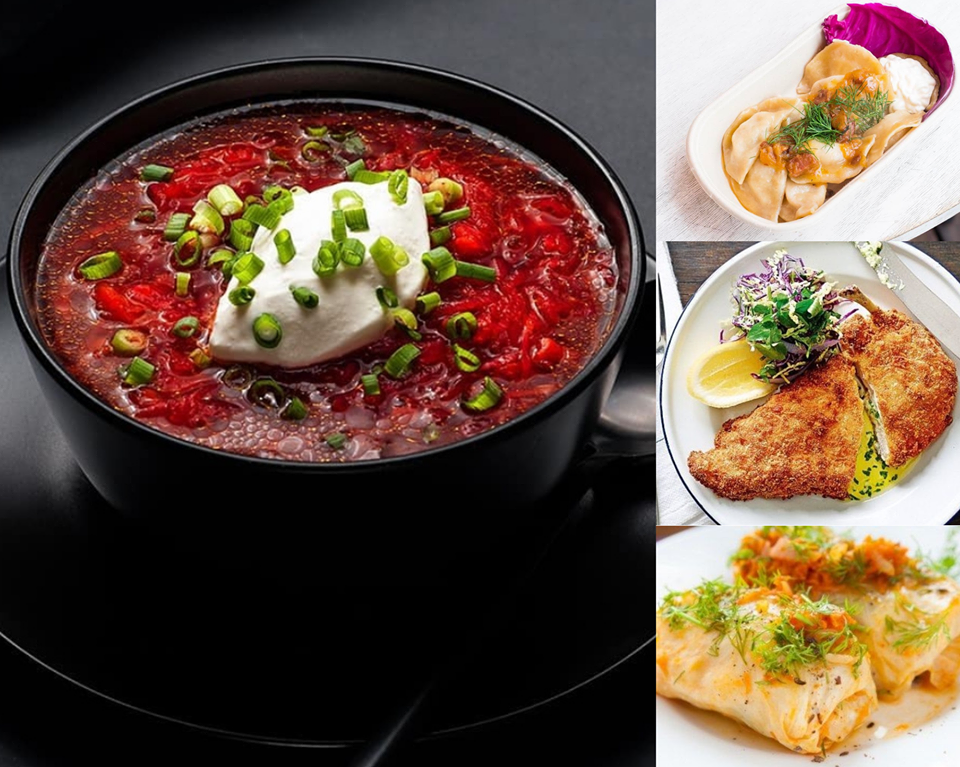 Ukraine has been a melting pot of cultures and people throughout the European history. This had an incredible influence on the culinary heritage of the country, giving the world a unique cuisine full of colour, taste and wonderful ingredients perfect for the soul.

These are the 7 most delicious Ukrainian traditional dishes you need to try.

Borscht is a staple dish of the Ukrainian cuisine. Every household has its own unique family recipe, and it is believed that a girl is ready to get married only when she masters the science of preparing a delicious borscht soup due to its complex and lengthy process of making. A rich meat (traditionally beef) based soup, Borscht has a very distinctive red colour because of its key ingredient – beetroot. It also includes cabbage, potatoes, beans, onions and carrots. It is served with pampushki, brioche like little buns glazed with garlic, and with a dollop of sour cream. Borscht is a dish perfect for the soul and therefore usually ordered as a main dish at lunchtime to keep you going for the day.

Varenyky are small ‘half-moon’ staffed dumplings that are boiled in hot water (can be then lightly fried as well) and served with butter and sour cream. They can be sour or sweat depending on the ingredients used for stuffing such as the variety of meats, mushrooms, liver, potato, cabbage, cherries, blueberries, strawberries, cheese, etc. Varenyky can be enjoyed as both, a main course and as a dessert. The most popular and traditional version is stuffed with lightly fried cabbage and served with caramelised onions, bits of pork cracklings and with a sour cream on top. A ‘must-try’ dessert option is dumplings staffed with sour cherries served with butter, icing sugar and sour cream. The combination of sweat and sour is so delicious and irresistible that you just can’t get enough of it and we guarantee that you will be ordering it over and over in Ukraine.

Chicken Kyiv or ‘Kotleta po-Kyivski’ is probably the most popular Ukrainian dish which most of our readers will be familiar with. You might not know but Chicken Kyiv was the very first chilled ready meal sold by Marks and Spenser in 1979 in Britain, and it was so essential to the British consumer that it was included in a basket of consumer goods used to measure inflation in the UK! And we are not surprised by its global popularity – it is simple, affordable and tasty at the same time. The cutlet is made of chicken fillet pounded and rolled around cold butter with garlic and dill, then coated in egg yolk and breadcrumbs, and finally deep fried to create that perfect crispy finish. One should be careful though not to splatter themselves with hot butter when slicing the chicken fillet, as it is a common mistake made by many.

Banush is a traditional porridge dish of the Hutsul region in Western Ukraine. Banush was a food of the poor farmers and cattle-herders in the mountainous regions of Ukraine as it was simple to make but provided a lot of energy for the whole day. It is made of cornmeal cooked in homemade sour cream and served with various toppings like pork cracklings, very salty sheep cheese, mushrooms, onions and herbs. This rich and velvety porridge was traditionally prepared over open fire in the Carpathian Mountains by Hutsul men only, and it’s always served hot. Due to its rich ingredients, we would not call it healthy or vegan, but you will most definitely fall in love with it after tasting it.

Syrnyky is a perfect breakfast dish as it goes so well with a cup of coffee or tea in the morning. These round patties, soft and silky smooth from inside but crispy golden from outside, are made from cottage cheese, flour, eggs and sugar. Patties can be also staffed with nuts, dry fruits or fresh berries. Syrnyky can be deep fried in butter or oil or baked in the oven instead. There are also many ways to eat it including with sour cream, fresh fruits, jams, icing sugar, honey, Nutella or maple syrup. It’s a favourite breakfast choice of Ukrainians and many families believe that Syrnyky are very healthy for children as it is a good source of Calcium.

Salo is a traditional appetiser made of cured pork fat. It is made by curing pig’s rind with salt or by fermenting it in brine, sometimes it can be smoked. You either love it or you hate it, and one can refer to it as a marmite of the Ukrainian cuisine. Ukrainians of all ages love it, and it has become a source of humour and many jokes describing Ukrainian character and culture. Salo is national delicacy which is eaten cold, and it is commonly served on a rye bread with mustard or horse radish dip, fresh spring onions, garlic and pickles, and it’s almost always accompanied by a shot of Horilka (Ukrainian homemade vodka).

Cabbage rolls in Ukraine are known as Holubtsi meaning literally ‘little pigeons’. Each family has its own version of Holubtsi recipe which varies greatly by region too. Fillings can include minced meat, vegetables, grains or a combination of these ingredients. Most common version of the staffing is made of minced pork, rice and herbs. The staffing is rolled in cabbage leaves and slow cooked in tomato broth in a pan or can be baked in the oven (much tastier version in our opinion). This dish is so comforting and hearty and is perfect as a main course which is usually served with sour cream and rye bread.

Kyiv Day, what is it all about?